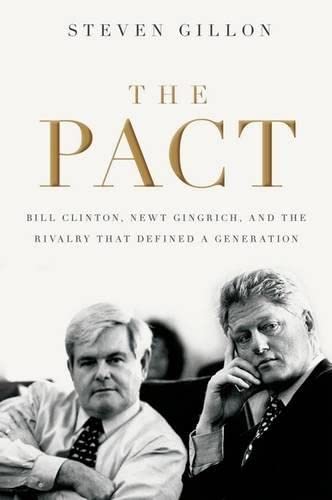 The Pact: Bill Clinton, Newt Gingrich, and the Rivalry that Defined a Generation

An unlikely, fleeting and largely unknown alliance between the former president and speaker of the House occupies center-stage of this thoughtful book that recreates the tumultuous years of the Clinton administration. Gillon ( ) provides compelling evidence suggesting that political foes Clinton and Gingrich formed a secret alliance in 1997 and were prepared to forge a bipartisan compromise on Social Security and Medicare, a plan that was derailed when the Monica Lewinsky scandal broke. In slightly shapeless early chapters, Gillon surveys the parallels and divergences in the early lives and careers of both men, casting his two protagonists as mirror images of each other: deeply intelligent children of the 1960s greatly affected by the politics of the decade, they became passionate, charismatic leaders who succumbed to personal weaknesses and saw their brilliant careers overshadowed by ignominy. Though Gillon slightly overreaches in framing his story as an epilogue to the culture wars of the '60s, he nevertheless renders a fraught moment in American political history with clarity.