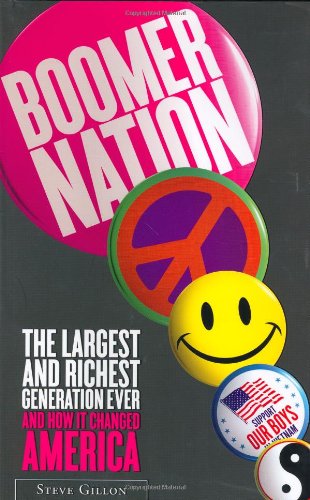 BOOMER NATION: The Largest and Richest Generation Ever, and How It Changes America

The historian/host of the History Channel's , Gillion chronicles post-WWII America through the lives of six boomers who represent different strands of baby boom culture—which Gillon asserts has become synonymous with American culture. Four of his subjects have achieved national prominence: Bobby Muller, who founded Vietnam Veterans of America; lawyer and cancer survivor Fran Visco, who became president of the National Breast Cancer Coalition; Marshall Herskovitz, developer of the seminal television series ; and architect Elizabeth Plater-Zyberk, who created the avant-garde Florida community of Seaside. Together with Donny Deutsch, a self-made advertising mogul, and AlbertaWilson, who overcame substance abuse and poverty to become a Christian educator, they provide the focus for a look at the Vietnam War, the women's movement and the attraction of some boomers to fundamentalist religion. What Gillon uniquely accomplishes is to illuminate how pervasive boomer influence continues to be in the 21st century. He touches on iconic events and influences— , Woodstock, the Cold War, the assassinations of John F. Kennedy and Martin Luther King—but he is refreshingly unnostalgic about them. Gillon makes especially interesting points when exploring the continuity from the boomers to Gen X (born between 1965 and 1976) and Gen Y (1977–1995). His assessment of the boomer is generally favorable—boomers did not abandon their core values of self-reliance, entitlement and idealism, but have applied those values to the changing challenges they have faced. The result, he says, is that "we are all boomers now."