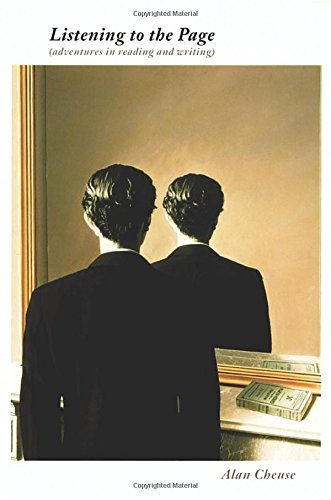 LISTENING TO THE PAGE: Adventures in Reading and Writing

NPR listeners know Cheuse as the friendly book commentator who's been a fixture on for two decades; he is also a well-received fiction writer (). Over the years Cheuse has consumed untold thousands of books for work, research and pleasure; for this reason if no other it would be interesting to hear what he has to say about the mysterious alchemies of reading and writing. But in this first collection of criticism, Cheuse's "adventures" turn out to be fairly uninspired excursions. Nearly two-thirds of the essays have appeared in other venues, and little has been done to update them or give them a book's coherence. For example, in his opening section, he treats stylistic points in the work of neglected Cuban novelist Alejo Carpentier, leaving unexplained what the connection to the surrounding essays—one on pictorial fiction, one on reading—might be. Cheuse's critical prose tends to be a curious hybrid of biography, plot summary and appreciation, occasionally held together by a thin conceptual framework (e.g., "historical truth" or "minimalism"). His essays shy away from a critical standpoint, tending instead to graze around various topics before arriving at a sort of impenetrable nonconclusion ("Writers make narratives that develop over time... all we can do is work with our language and the time it takes to tell it in..."). The best parts of the book are anecdotal, recounting Cheuse's personal journeys as a reader and as a struggling writer; these generously conceived moments will leave readers the more disappointed for what this volume could have been.