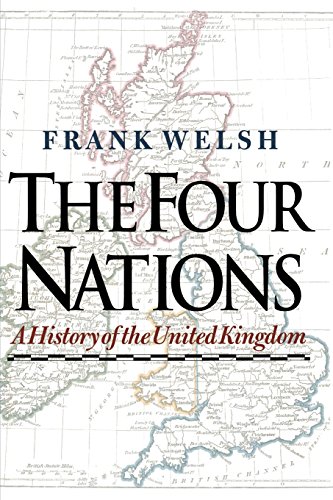 THE FOUR NATIONS: A History of the United Kingdom

Welsh (, etc.) examines over 2,000 years of the history of England, Ireland, Wales and Scotland, focusing on how these nations interacted to shape one another's history. Unsurprisingly, England is the major player here. The history of Scotland and Ireland is largely a matter of their attempts to remain free of, and then accommodate to, a hegemonic England. Welsh begins with the Roman conquest of Britannia and establishment of the modern-day borders of England, Scotland and Wales. He concludes in the year 2001, considering whether "the end of the United Kingdom" is at hand (to those who fear it, he replies that "the unitary state had been disintegrating for over a century"). After detailing the construction of the U.K., Welsh devotes most of the latter part of the book to events in Ireland—from the failed Rising of 1798 to the Great Irish Famine, Gladstone and the failure of Home Rule, the partition of Ireland, sectarian conflict in Northern Ireland and the present-day peace process. By comparison, Welsh's treatment of Scotland and Wales is minimal. Welsh has chosen breadth of coverage over depth. We get only a few pages, for instance, on the 1688 Glorious Revolution—one of the seminal events in British history—and surprisingly little on WWII. Nor is there much about the development of the British Empire. Welsh's narrative is too often a dry recitation of well-known dates and names, rarely delving below the surface or offering fresh insight.