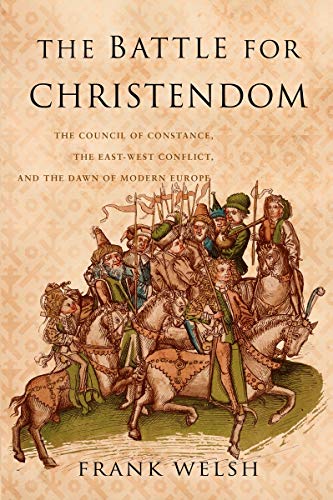 The Battle for Christendom: The Council of Constance and the Dawn of Modern Europe

At the beginning of the 15th century, Christendom was in full decline, attacked from the outside by Islam and disrupted from within by schism regarding the office of the Pope. Until the Council of Constance (1414–1418), three popes—Gregory XII in Rome, Benedict XIII in Avignon and John XXIII in Germany—ruled Christendom, provoking schism. In 1387, Sigismund, already the king of Czechoslovakia, became the Holy Roman Emperorthrough his political savvy and military acumen, and with the help of John XXIII convoked the Council of Constance. The council not only ended the schism but also returned the papacy to Rome for good—electing Martin V as pope—and condemned the heresies of reformers John Wycliffe and Jan Hus, who was burned at the stake for his positions on the Eucharist. Although the book offers a useful portrait of Sigismund, a little-known but important figure in church history, it has a plodding, workmanlike style and offers little new insight into the work of the council itself.