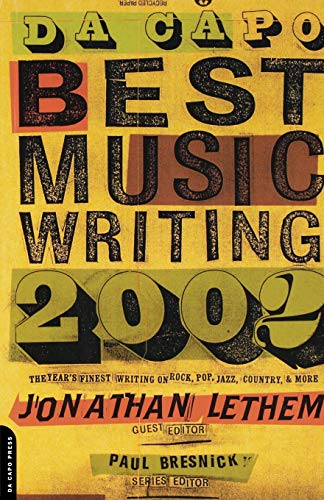 In this collection of 28 excellent essays—penned by some of the usual suspects (Greil Marcus, Simon Reynolds) as well as upstarts (Kate Sullivan, Kelefa Sanneh)—editor Lethem () more than achieves his goal of producing "a book of encounters... an invitation to an impossible, gabbling conversation, a party line, where every voice is unforgettable." While the book's subtitle is perhaps misleading and overly ambitious (there are no essays on classical music, blues or reggae, and only a couple on jazz and country), there is barely a weak essay in the collection. David Gates on the improbable 2001 mania for bluegrass legend Ralph Stanley, Lenny Kaye's powerful and maudlin-free obituary/tribute to Joey Ramone and Steve Erickson's idiosyncratic "Top 100" songs related to his beloved Los Angeles are among the stronger entries. This volume also takes a few risks that more than pay off: selecting the 's fake news reports titled "God Finally Gives Shout-Out Back to All His Niggaz" and "Marilyn Manson Now Going Door-to-Door Trying To Shock People" not only provides hilarious counterpoint to many of the book's heartfelt essays but also poignantly illuminates just how much musical trends define the general culture at large.