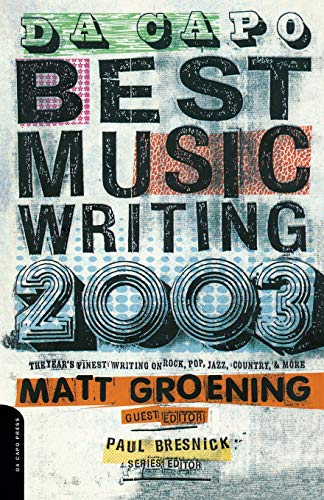 This fourth volume is edited by creator and onetime music critic Groening, who writes that he didn't try for any overview of significant trends, but instead "just went for essays jammed with information and conveyed with style, passion and wit." Each of the 21 examples vividly displays those qualities, and there is nary a weak essay (although, once again, writings on country, reggae and classical are sparsely represented). Some of the best include Bill Tuomala's hilarious alternate history of Van Halen, with the rock superstars recast as underground critics' favorites who never achieved success in an era when punk groups like the Ramones were "dominating the charts"; Chuck Klosterman's investigation of the present-day popularity among Mexican-Americans of Morrissey, the sexually ambiguous front man of the mid-1980s British cult band the Smiths; two long pieces from the on funk legend James Brown and recently rediscovered bluesman R.L. Burnside; and Elvis Costello's remarkable selections for what he sees as appropriate listening music for every hour of the day, from 6 a.m. to 5 a.m. As in previous collections, satirical writers from the provide criticism masked as comic relief in "37 Record-Store Clerks Feared Dead in Yo La Tengo Concert Disaster" ("It's just a twisted mass of black-frame glasses and ironic Girl Scouts T-shirts in there").