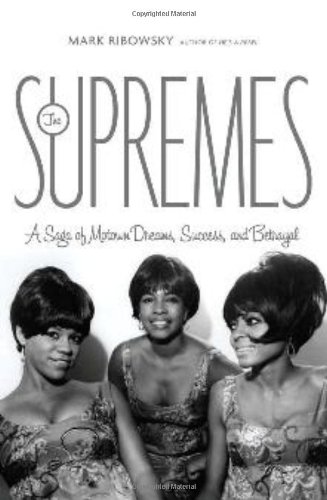 The Supremes: A Saga of Motown Dreams, Success, and Betrayal

Biographer of Phil Spector ( ), among others, Ribowsky takes a dishy, insider look at Berry Gordy’s making of the Supremes, with some nasty swipes at Diana Ross while elevating Flo Ballard as the trio’s martyr. In his detailed look at how Berry engineered his Motown empire, thanks to his smart sisters and a lot of luck and fortuitous pairing of talent, Ribowsky nicely intersperses some hindsight reflections by the main players, such as the brothers Brian and Eddie Holland of the legendary songwriting team with Lamont Dozier, with comparative accounts by Mary Wilson, Ross and others in order to sift the truth from the legend. While the author constantly snipes at Ross for her “popping eyes” and naked ambition, it was largely her single-minded drive that garnered attention to the trio’s early incarnation as the Primettes, and her high girl-woman singing voice that established the Supremes’ distinctive sound. Moreover, Ross’s influence on Gordy (and his faith in her future solo stardom) motivated him to keep pushing the group into the limelight, in spite of other girl groups that had a bigger top hit following, such as Martha Reeves and the Vandellas. In this engaging, vivacious account, Ribowsky energetically and thoroughly underscores the Supremes’ significance as one of the first crossover successes.