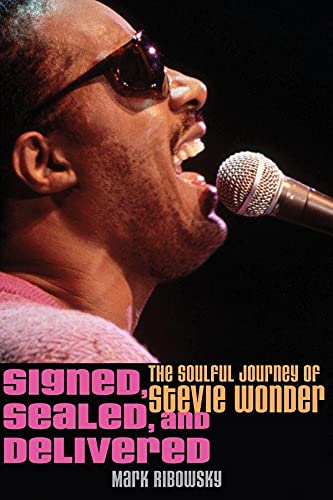 Signed, Sealed, and Delivered: The Soulful Journey of Stevie Wonder

From the rollicking debut of “Fingertips—Part 2” to the funk piano and synthesizers of “Superstition” to the political rap of “Superstition,” Stevie Wonder's brilliant music has managed to capture the hearts of his listeners while at the same time probing the limits of musical styles and moving soul and rhythm and blues to new musical levels. Born in poverty in Saginaw, Mich., Wonder lost his sight soon after he was born. His blindness heightened his sense of hearing, and he soon began to master the toy musical instruments that his absentee father brought him. Very soon, Wonder graduated from toys to the real things: his barber gave him a Hohner chromatic harmonica; his church choir director, as well as his neighbor, allowed him to play for hours on their pianos; and the local Lions Club gave a drum set to Stevie after hearing him play it. Soon Wonder was the hit of Motown, and his career took off like a comet, only to burn out and lose some of its fiery glow in the 1980s and 1990s. Music journalist Ribowsky ( ; ) traces the rapid ascent of Wonder's musical career as well as the tumultuous ups and downs of his personal life in this workmanlike and pedantic book. Ribowsky's exploration of Wonder's music is first-rate, but his tendency to overlook Wonder's faults turns this into one fan's hagiography.