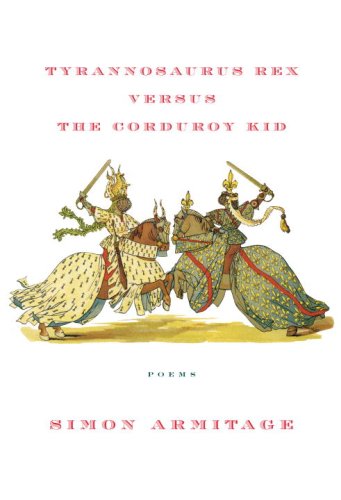 Tyrannosaurus Rex Versus the Corduroy Kid

Armitage is one of the U.K.’s most popular, important and prolific poets—as well as a writer for TV and radio, a translator, a teacher and a member of a rock band. Following his 2005 selected poems , as well as a recent translation of and a dramatic version of this is Armitage’s first individual collection to appear in the U.S., and it’s high time. The collection, Armitage’s 11th, amounts to an ambitious, personal meditation on the ugliness of life in a Western civilization at war with the Middle East, something Americans and the British have in common. A passage from the Cyclops section of , in which the hero and his crew commit an “act [that] was to haunt us,” sets the stage for haunted political poems like “Republic,” where the government forbids all but one color of car each day of the week, and “After the Hurricane,” in which citizens “drink and smoke/ amongst mortar and bricks, here at empire’s end.” More personal poems bring the same feeling home with darkly self-deprecating humor: “I’m ugly because I proved God to be a mathematical impossibility.” This collection attests that Armitage deserves to be seen as major poet at the peak of his powers on both sides of the pond.