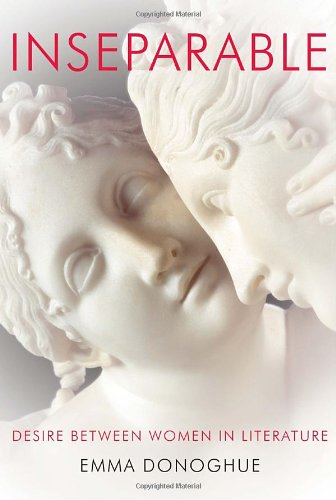 Inseparable: Desire Between Women in Literature

“The past is a wild party; check your preconceptions at the door,” warns British literary historian and novelist Donoghue ( ) in her comprehensive catalogue of a thousand years of Western literature. “[I]n Western culture passion between women is always a big deal, whether presented as glorious or shameful, angelic or monstrous,” she claims. These passions are not always, strictly speaking, lesbian, Donoghue says, as she sorts them into categories (e.g., cross-dressing and the resulting “ 'accident' of same-sex desire' ”; women friends who remain inseparable despite all obstacles). She links them to historical developments and deciphers their sometimes obscure language. “Morbid,” for example, was often a code word for “lesbian” in the 19th century. Delivering on her promise of a wild party, Donoghue reads as a rivalry between Lovelace and Anna for Clarissa's heart; she considers as an early schoolgirl novel (note Jane's crush on her schoolmate Helen), whose form would be adapted by early lesbian coming-out novels. With her excellent reading list, readers can test for themselves the “unexpected continuity” Donoghue finds in the presence of passion between women in Western literature. 19 photos.