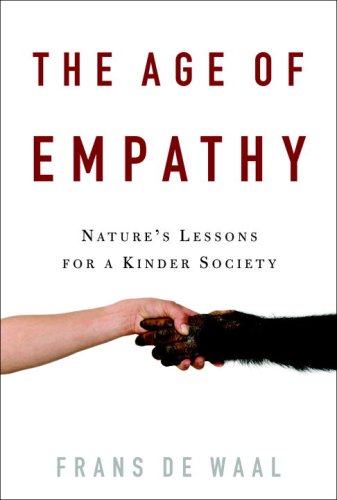 The Age of Empathy: Nature's Lesson for a Kinder Society

De Waal ( ), a renowned primatologist, culls an astounding volume of research that deflates the human assumption that animals lack the characteristics often referred to as “humane.” He cites recent animal behavior studies that challenge the “primacy of human logic” and put animals on a closer behavioral footing with humans. Based on the studies of mammals, from primates to mice, de Waal proposes that empathy is an instinctual behavior exhibited by both lab rats and elephants. But de Waal's aim isn't merely to show that apes are transactional creatures with a basic understanding of reciprocity—but to reveal that the idea that humans are naturally calculating, competitive and violent is grounded in a falsehood willfully and selfishly perpetuated. Throughout the book, de Waal illustrates how behaving more like our wild mammalian cousins may just save humanity. His contention, colored by philosophical musings and fascinating anecdotes of observed emotional connections between animals, argues persuasively that humans are not greedy or belligerent because animals are; such traits are far from organic or inevitable but patently manmade.