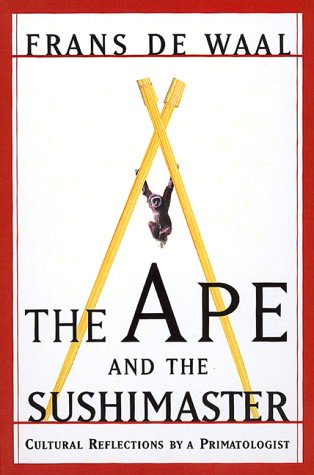 THE APE AND THE SUSHI MASTER: Cultural Reflections of a Primatologist

Though evidence suggests that animals can teach skills to members of their group, appreciate aesthetics and express empathy, Western scientists are often reluctant to interpret such behavior in cultural terms, claims zoologist and ethologist de Waal ( and ). "Our culture and dominant religion have tied human dignity and self-worth to our separation from nature and distinctness from other animals," he writes, arguing that this dualism prevents us from recognizing how similar human and animal behavior can be. De Waal cites fascinating examples of animals acting in ways typically thought the exclusive purview of humans (apes that enjoy creating paintings or engaging in nonreproductive sexual activity; rescue dogs that become depressed when they find only corpses). Inspired by the work of Japanese primatologist Kinji Imanishi, whose cultural tradition emphasizes interconnectedness among living things, de Waal argues for an end to the West's anthropocentric bias in science. De Waal prefers a "Darwistotelian" approach, which would seek "to understand humanity in the wider context of nature" and build a concept of human identity "around how we are animals that have taken certain capacities a significant step farther" than have other species. Lucid and engaging, though at times loosely focused, de Waal's "reflections" will likely capture the attention not only of zoologists and social scientists but of animal-rights advocates as well.