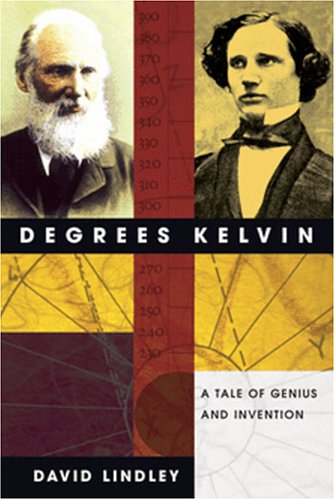 DEGREES KELVIN: A Tale of Genius, Invention, and Tragedy

William Thomson, later Lord Kelvin, was one of the 19th century's best-known scientists and inventors. As Lindley ( ; ; etc.) so comprehensively explains, Kelvin (1824– 1907) was largely responsible for the creation of the twin fields of electromagnetism and thermodynamics, and played a significant role in connecting England and America by transatlantic telegraph cable. Kelvin's work was so important and he was so well known that he became the first British scientist elevated to the peerage, and when he died, he was buried in Westminster Abbey near Isaac Newton. Yet, unlike other scientists of his and earlier times, Kelvin is no longer a household name. In his thoroughly engaging biography, Lindley expertly examines Kelvin's life and the thought processes of this mathematical genius as well as providing a rich overview of physics as it was created from what had been known as "natural philosophy." Lindley also does a superb job of explaining how, over the course of his life and by sticking to his basic scientific principles, Kelvin changed from an extraordinarily creative theoretician, in both the pure and the applied realms, to a scientific anachronism, defending outmoded ideas and refusing to accept new concepts. Lindley provides insight into a misunderstood scientific legend and into the process of science itself at a critical period of history.