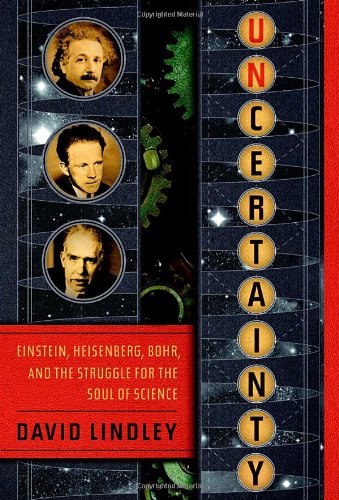 Uncertainty: Einstein, Heisenberg, Bohr, and the Struggle for the Soul of Science

The uncertainty in this delightful book refers to Heisenberg's Uncertainty Principle, an idea first postulated in 1927 by physicist Werner Heisenberg in his attempt to make sense out of the developing field of quantum mechanics. As Lindley so well explains it, the concept of uncertainty shook the philosophical underpinnings of science. It was Heisenberg's work that, to a great extent, kept Einstein from accepting quantum mechanics as a full explanation for physical reality. Similarly, it was the Uncertainty Principle that demonstrated the limits of scientific investigation: if Heisenberg is correct there are some aspects of the physical universe that are to remain beyond the reach of scientists. As he has done expertly in books like , Lindley brings to life a critical period in the history of science, explaining complex issues to the general reader, presenting the major players in an engaging fashion, delving into the process of scientific discovery and discussing the interaction between science and society. Thus, Lindley presents a very good chapter dissecting historian of science Paul Forman's iconic, if terribly flawed, analysis of the same time period.