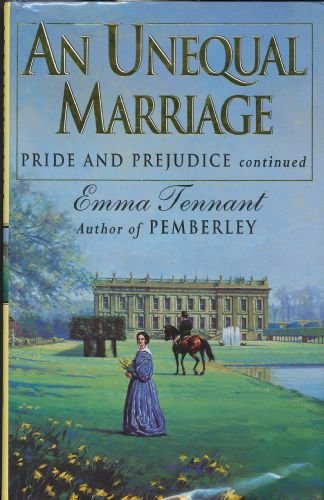 An Unequal Marriage, Or, Pride and Prejudice Twenty Years Later

In her second engaging sequel to Pride and Prejudice, Tennant (Pemberley) enmeshes beautiful Elizabeth Bennet Darcy in a nicely snarled web of predicaments. Elizabeth and Darcy, still blissful after 19 wedded years, have a winsome daughter, Miranda, and an unruly son, Edward, rumored to be wenching in London and dicing away his estates. Elizabeth's guilt as a failed mother is compounded when, during a woodland ramble, she lets an admirerer embrace her and upbraids herself as an ``unfaithful wife.'' Elsewhere, her mother, the giddy Mrs. Bennet, causes alarm by traipsing about London with the shady Lady Harcourt. Domestic drama simmers, but even so Elizabeth must hostess a nuptial party for her ex-beau, Col. Fitzwilliam, and the strident young Sophia Farquar, who chatters chiefly of lambing and livestock. When Darcy tries to control the family mess with his usual cold censorious pride, Elizabeth senses her marriage crumbling. No longer able to tolerate so lordly a spouse, she flees her mansion like Jane Eyre running from ruthless Mr. Rochester. (The novel also borrows a note from Middlemarch with its talk of ``Reform'' and its heroine's concern for the cottagers.) Austen's cast of minor familiars-spiteful friends and kin-gets a delicious comic workout, and Tennant does a creditable imitation of period diction, though her tone is more sly and playful than that of her model, while her descriptions surpass Austen's in visual effects of art, decor and gardens. Austenites-and Tennantites-should love the whole package, including the wrap-up, which leaves enough loose ends to promise further sequels. (Nov.)
close
Details