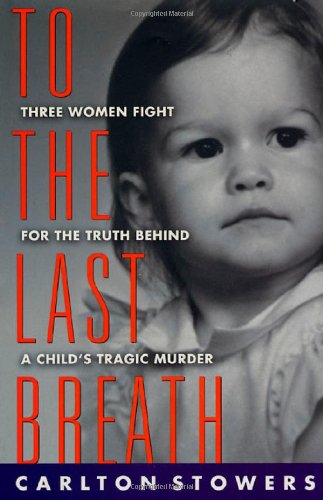 To the Last Breath: Three Women Fight for the Truth Behind a Child's Tragic Murder

When two-year-old Renee Goode dies unexpectedly at her father's Alvin, Texas, home in 1994, her mother, Annette, immediately suspects murder. Shane Goode, Annette's ex-husband, is her first and only suspect. When the medical examiner labels the cause of Renee's death as unknown, Annette's mother, Sharon Couch, calls in an Orlando pathologist who performs a new autopsy on the exhumed corpse and rules the death a homicide. Stowers (whose Careless Whispers won the 1987 Edgar Award for Best Fact Crime book) describes Shane's crushing debt, his $50,000 insurance policy on Renee and his prior insurance fraud, but does not portray him in substantial psychological depth. Since both crime and punishment are foregone conclusions, it's the soap-operatic aspects of the story that will hold readers' interest--with a powerful grip. At the time of the trial, Sharon Couch's son was serving a 10-year sentence for a killing arising from a childish prank. While assisting on her son's case, Sharon discovered a talent for detective work, and she eventually became a licensed PI. Sue Dietrich, the police detective who picked up the case when the file nearly went cold, had also lost a child about Renee's age. Meanwhile, Dietrich's philandering ex-husband, Brazonia County's star prosecutor, was assigned first chair in the case. Author Stowers knows good material when he sees it. He doesn't pump up his prose with bravado or obvious characterizations, but takes full advantage of the web of coincidence, allowing the players to speak for themselves and the complex plot to spin out. The result may lack suspense, but it has more than enough melodrama for a grade-A movie-of-the-week. Photos not seen by PW. (Feb.)
close
Details