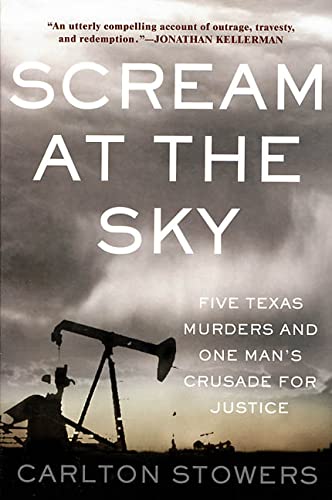 SCREAM AT THE SKY: Five Texas Murders and the Long Search for Justice

Rural Texas endures a long-unsolved serial killing spree, in this grim suspenser by Edgar Award–winner Stowers ( etc.). The narrative begins in late 1984, when a young nurse is found raped and murdered in Wichita Falls; soon a second, equally brutal murder stokes the city's fears. One indictment ends in mistrial when a third murder occurs; eventually, there are five victims. Faryion Wardrip, a local eccentric with drug and money troubles, and an acquaintance of the third victim, readily confesses to her murder. Paroled after serving 11 years of his 35-year sentence for that one murder, Wardrip, purportedly a changed man, becomes active in a local church and remarries. In a classic instance of "murder will out," however, a hungry young district attorney's investigator named John Little begins working the long-unsolved murders in December 1999 and soon gleans a crucial clue from old reports that might tie Wardrip to the other murders. The book becomes increasingly suspenseful as Little quietly builds his case against the sanctimonious Wardrip, whose composure crumbles when he's finally confronted on his old misdeeds. Stowers demonstrates sensitivity toward the many survivors of Wardrip's crimes, yet at heart this is a gory, effective meditation on the evil sometimes committed by "ordinary" men and the great efforts necessary for justice. 8 pages of b&w photos not seen by