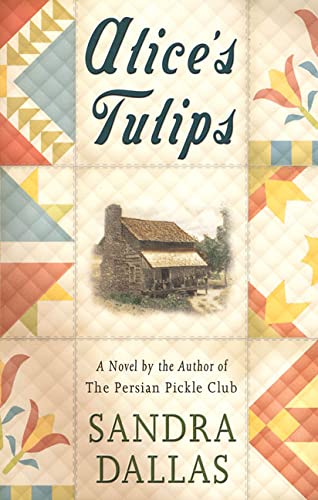 Loyalty, trust and friendship are the themes of Dallas's (The Persian Pickle Club) cozy, suspense-driven epistolary novel, set during the Civil War. When her husband enlists as a Union soldier, teenage newlywed Alice Keeler Bullock must live on his family's Bramble Farm on the outskirts of Slatyfork, Iowa, with only her stern mother-in-law, Mother (Serena) Bullock, for company. Alice is lonely without the constant companionship of her sister, Lizzie, and their six younger brothers. She passes the time writing long, gossip-filled letters to Lizzie in Galena, Ill., and growing passionate about her quilting. Newly pregnant, Alice hopes that the baby will win over her fault-finding mother-in-law, but Alice doesn't make things easy for herself. She regularly boasts about her superior sewing skills, yearns aloud for fashionable clothing and speaks before she thinks. In other words, she is young and ignorant of the ways of the world, which leads to trouble with a Confederate sympathizer, Samuel Smead, who, encouraged by Alice's innocent flirtations, pursues her with an intensity that tarnishes her reputation. Meanwhile, Alice slowly makes friends with girls her own age, including Samuel's sister-in-law, Nealie, and a runaway mother, Annie, seeking shelter for herself and her blind daughter. As the story unfolds, secrets and mysteries abound, and Alice shares every joy and sorrow with her sister by letter, a credible narrative form except when Alice reproduces extended dialogue. The last third of the novel is a delicate balance between sentiment and tragedy; in some instances, the secrets spilled go over the top, with no adequate motives for why characters are so cruel. Alice is a feisty Northern counterpart to Scarlett O'Hara, however, and her irreverent humor and precise expression will keep readers entertained. First serial to Good Housekeeping; author tour. (Oct.)
close
Details