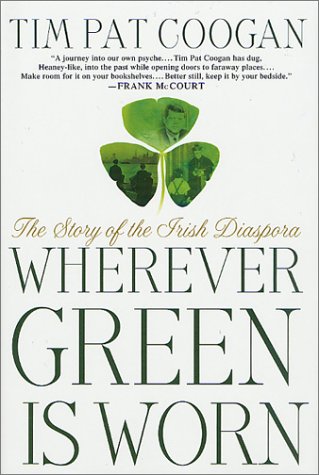 WHEREVER GREEN IS WORN: The Story of the Irish Diaspora

Coogan, biographer of Michael Collins and Eamon DeValera, again tackles a boisterous, unruly Irish subject—the diaspora. Irish emigration first began, Coogan tells us, in the 12th century, when the Normans invaded Ireland. Cromwell's terrorist campaign in the 17th century drove many Irish to France and Spain, while Cromwell deported many more to the West Indies and Virginia. Emigration took a more sinister turn with the advent of the famine in the 1840s. Coogan estimates that "a million died and probably as many as two-and-a-half million people left Ireland in the decade 1845–1855." He also estimates that another five million emigrated between the end of the famine and 1961. Where did they all go? Everywhere: Europe, U.K., U.S., Canada, Australia, New Zealand, Africa, the Caribbean, Latin America and Asia. Coogan breaks down by chapter the geographical travels, and includes some very colorful tales. For example, Mexico still embraces the memory of the wild (St. Patrick) Brigade—soldiers who deserted the American army during the Mexican War to fight on the side of their fellow Catholics. The first Irish came to Canada looking for cod fish, but many Canadians still remember the invasion of the quixotic Fenians, whose aim was to "liberate" Canada from British rule after the American Civil War. Chile still celebrates its Liberator, one Bernardo O'Higgins, and Australia remembers its Irish Robin Hood, Ned Kelly. The U.S. chapter is filled with stories of Tammany and the Kennedys, and there is an extremely interesting section on Bill Clinton and how he brokered the Good Friday Agreement. Rich in characterization and detail—not to mention the Coogan wit—this is an invaluable reference volume that belongs on the bookshelf of every Celtophile.