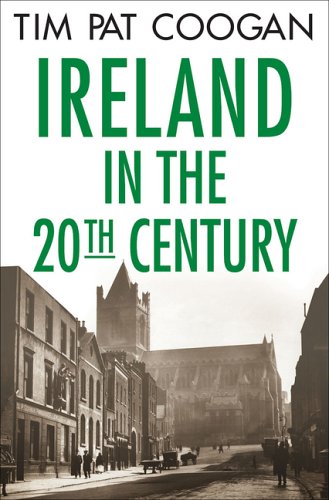 IRELAND IN THE TWENTIETH CENTURY

Coogan, the respected biographer of Eamon De Valera and Michael Collins, takes a fascinating in-depth look at the country that went from colony in 1900 to economic dynamo by the advent of the 21st century. Coogan takes illuminating looks at De Valera, who gave a face to Irish nationalism, and Collins, who, through his superb intelligence network and the handiwork of his personal assassination squad, literally terrorized the British out of Ireland. Although no fan of De Valera, Coogan shows what a master politician he was during WWII as, under threat of invasion by the British, he stood firm for Ireland's neutrality, while at the same time accommodating the British by returning downed airmen. One of the heroes of the Irish century is Seán Lemass, who went from being one of Collins's gunmen to being prime minister, starting to bring Ireland out of its economic doldrums. During his regime, from 1959 to 1967, Lemass instituted many changes in education and laid the groundwork for Ireland to join the EEC. Coogan compares the government of Northern Ireland and its policies toward Catholics to "South Africa under apartheid." He shows how, by gerrymandering, the Unionists stripped Catholics of all power in the "Six Counties." This powerlessness resulted in the civil rights marches of the 1960s, which, when repressed, nourished the long-dormant IRA. Coogan goes through the long process that led to the 1998 Good Friday Agreement and fully credits the work of Bill Clinton, U.S. Ambassador Jean Kennedy Smith, Sinn Féin leader Gerry Adams and Prime Minister Albert Reynolds. The politics and culture of Ireland changed dramatically in the 20th century and Coogan has done a masterful job of taking a very complicated history and making it lively reading.