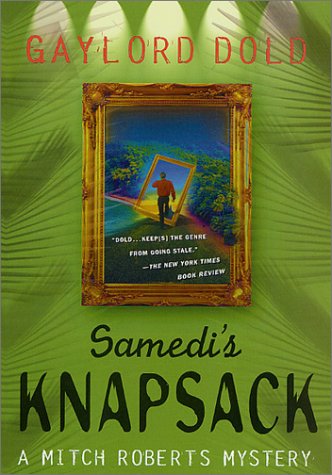 The ninth installment in this respected series finds peripatetic ballplayer-turned-PI Roberts in turbulent post-Duvalier Haiti in an absorbing and exotic mix of murder and , or Haitian voodoo. (The title, incidentally, refers to Baron Samedi, the supposed God of Saturday nights, who puts captured souls in his knapsack.) Bobby Hilliard, an old friend from his ballplaying days, asks Roberts to travel from Miami to Haiti to buy some artwork for his galleries; Hilliard's previous courier disappeared mysteriously with a large amount of money and some valuable paintings. After surviving an explosion in a church, Roberts returns to his hotel room to find a dead chicken, its throat cut, doused in blue paint—an obvious voodoo curse; the same thing happened to his predecessor. Violence, betrayal and a devastating hurricane follow. The story shifts into high gear when the action switches to Haiti, where the Tontons (the corrupt local police) rule the streets. The squalor and poverty prevalent throughout the island are memorably evoked: "Beggars hounded them for blocks. As they walked along the dust-choked residential streets of Port-au-Prince, Roberts could hear the Creole pleas echoing in the alleyways. Three limbless men on small four-wheeled carts pushed themselves behind him, beseeching him for anything—money, gum, trinkets, food." In all, it's a diverting mystery that posits a sometimes poignant image of a troubled and troubling country ruled by voodoo politics.