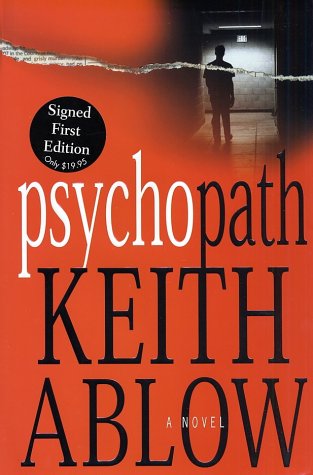 Ablow doesn't mince words when it comes to titles (; ; ), and the name of this entry, number four in the Frank Clevenger series, says it all. The psychopath in question, Jonah Wrens, opens the book blasting down the highway locked into anger mode. He's scattered 17 bodies behind him and is on the lookout for number 18. Ablow distinguishes this serial killer from his fictional brethren by making Wrens a brilliant psychiatrist, the savior of disturbed children. This is a subject dear to Clevenger's heart. After years of dope sniffing, womanizing and drinking, the forensic psychiatrist has adopted troubled teen Billy Bishop. He now faces life with a kid who has all the same problems and addictions he used to suffer from himself. At the same time that adopted son Billy is tossed out of school for peddling dope, Clevenger is tapped by the FBI to aid in the search for the so-called Highway Killer. Clevenger knows he should be home tending to Billy, but the lure of the hunt and the stirrings of lust engendered by bombshell FBI psychiatrist Dr. Whitney McCormick convince him to take the case. Meanwhile, Wren continues his murdering ways while moving from job to job, healing and saving abused children as he goes. The author's gambit is to put the reader into the uncomfortable position of actually admiring some of Wren's deeds, and it's an original twist on the serial killer formula. Abel tosses in a gratuitous, last-minute female-in-peril sequence, but most of the loose ends are neatly tied.