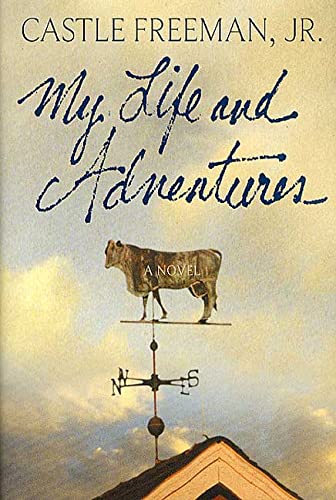 MY LIFE AND ADVENTURES

Freeman's quiet but affecting sophomore novel (after ) follows the hapless former professor Mark Noon, who arrives in the small Vermont village of Bible Hill in the late 1960s to fulfill the demands of his late mother's will. Noon inherits $100,000 and an old house, but the will stipulates that he must live on the land, no small challenge given the batty eccentrics who populate Bible Hill "in a concentration that today would give the town its own page in the DSM." Taking over the former residence of the deceased local hermit Claude Littlejohn, Noon finds a trunk containing the man's diaries and old photos going back to the early years of the century. Noon sees parallels between Littlejohn and himself in Littlejohn's struggles with isolation and personal demons. As Noon becomes more deeply involved in the community, he comes to savor the rhythm of town life, the harsh winters and even his screwball neighbors. The strength of Freeman's work is not just in his skillful depiction of Noon's personal evolution, but in his well-crafted sketches of the Bible Hill crowd, including the opinionated spinster school teacher ("She was pre-Freudian, Miss Drumheller. She believed in good and evil, mostly evil"), the wise-cracking and occasionally just plain wise Mr. Applegate and the rambunctious Amanda, who decides to share Noon's bed on her own terms (" 'It's my luck, you know? A whole state full of cowboys, and I have to end up with some kind of Buddhist,' " she self-deprecates). Although the book's momentum is sometimes hampered by flaccid historical tidbits, Freeman's witty and thoughtful observations are bound to charm.