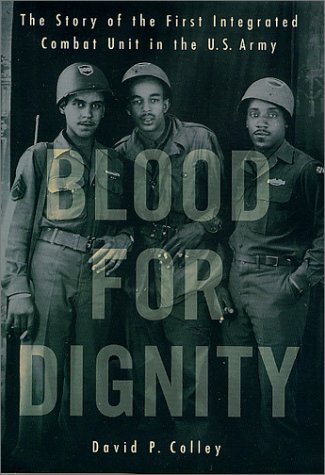 BLOOD FOR DIGNITY: The Story of the First Integrated Combat Soldiers in the U.S. Army

This compact and clearly written book adds detail to the history of African-American soldiers in World War II. Its subject is the African-American platoons added to white rifle companies near the end of the war in Europe because of a desperate shortage of infantry replacements. The focus is the Fifth Platoon, K Company, 394th Infantry Regiment, 99th Infantry Division, in action in March and April of 1945, against a German army down but far from out. Ably commanded by white Lt. Richard Ralston, some of the platoon's men had mostly street smarts (such as Waymon Ransom) and others had college degrees (such as Bruce Wright). All felt they had something to prove and by and large come away satisfied. Colley () presents the men directly, flaws and all. The black platoons have been frequently mentioned but not covered in such detail before, and the author has added capsule accounts of the African-American experience in the military before World War II and the assaults on their dignity in that war before they were allowed to shed blood. Based on comprehensive interviews and use of written sources, the book will be steadily engaging for anyone interested in WWII and integration history.