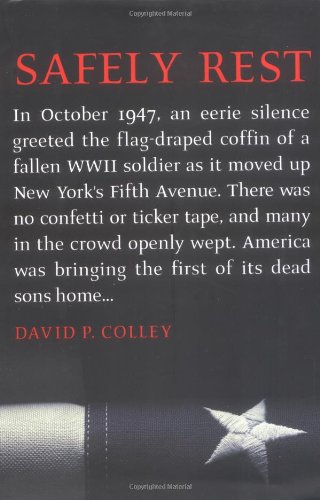 Military journalist Colley unearths an important and often overlooked episode from the annals of WWII with this account of one of the war's sadder epilogues: the repatriation of the bodies of 233,181 American soldiers who died in combat overseas. The American government sponsored a vast reburial program that lasted more than six years and cost over $200,000,000 (the equivalent of several billion dollars today). Colley ( ) wisely focuses the narrative on one figure, Lt. Jesse D. "Red" Franks Jr., who served in a vital air raid over Ploiesti, Romania (whose refineries supplied oil to Germany), in August 1943. Colley traces Franks's service on the European front, his fateful last flight, his father's attempts to find his missing son while working as a missionary in postwar Europe and the eventual repatriation of Franks's remains. This narrative strategy takes the book far beyond morbid accounting of the war dead; it provides a human face to the collective narrative of WWII. While Colley's writing sometimes falters into floridity ("Barge traffic jammed parts of the river that many crew members expected to be a ribbon of blue on the verdant plain"), his eye for detail and ability to tell an emotionally nuanced story result in a book of extraordinary interest to students of WWII and an important reminder of the sacrifices made by "the greatest generation."