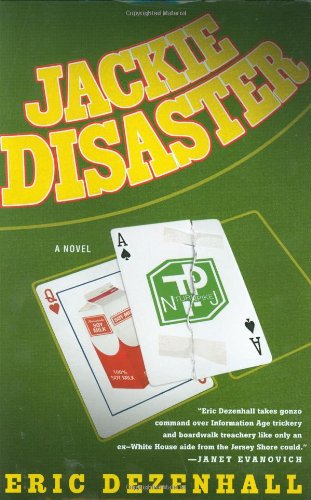 The world of the private eye and the spy gets spun for the 21st century in Dezenhall's broadly comic romp, in which Jackie Disaster protects the reputations of corporate clients under attack. Born Giovanni De Sesto, Jackie picked up his moniker as a kid boxer fighting in Golden Gloves and has grown up to head Allegation Sciences, with offices in an Atlantic City casino. Hired by Sally Naturale—kind of a mutated Martha Stewart from Jersey—after a woman claims she lost her unborn baby from drinking one of Sally's soy milk products, Disaster heads out to discredit the accuser and make the daffy Sally look as untarnished as possible. Dezenhall (), who once worked in the Reagan White House and currently is president of a crisis management firm, seems to be extrapolating the action from his popular nonfiction book, (1999). The undercover scenes with Jackie and his crew, known as the Imps, are great entertainment, with the Mafia hovering in the shadows and that Jersey setting, where "the movies had once been to the Delaware Valley what the Koran is to Islam." But the more realistic moments—Jackie's romance, problems with his father and raising his orphaned niece as a single dad—don't quite click amid all the clowning. This novel provides lots of fun in a Carl Hiassen mode.