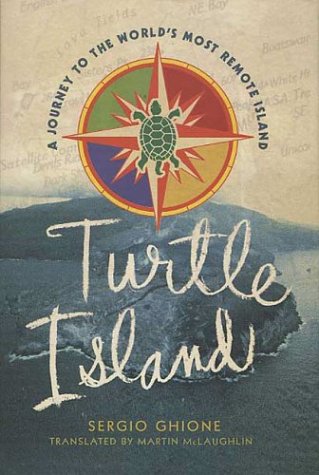 TURTLE ISLAND: A Journey to the World's Oddest Colony

In this historical travelogue of the isolated Ascension Island, Ghione goes to the ends of the earth but finds little save for giant green turtles. Ascension, a British colony in the middle of the Atlantic, lies 1,000 miles off the coast of Africa, near the equator. Ghione, a research scientist with the National Research Foundation in Pisa, Italy, went to Ascension to learn how green turtles find their way to the island each year to nest. At the time, his research was inconclusive—scientists have since shown they probably sniff the air—but Ghione has other purposes. He's seeking a secluded place for reflection and observation, a "geographical-metaphorical entity." He writes of his time on Ascension in plain, simple prose, but occasionally, the island's sparsely populated landscape moves Ghione to expand: "In the distance a desolate, ghostly mountain stands out against the pearl-colored sky, wrapped in wisps of cloud like smoke trailing from its entrails." He spends his days playing chess, drinking and tagging turtles with radio transmitters. Although there are occasional visitors and a few conversations with locals, most of Ghione's efforts involve chronicling the island's history. In the end, readers will note that in remote places, there's not much trace of the past. Despite an appendix and lists of Web sources, much of the book feels dated. When Ghione finished writing it in 1999, he needed permission from the British military to visit Ascension. Since then, a small tourist industry has burgeoned there. This is good news to visitors, but it also means the island Ghione visited isn't there anymore.