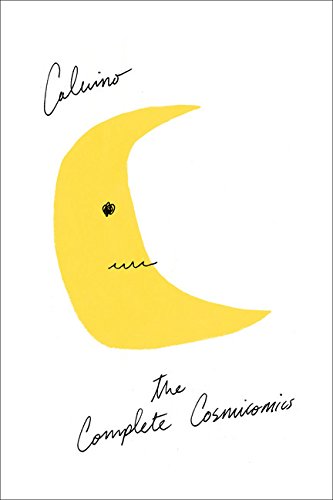 Reviewed by Seth Satterlee. Nearly 50 years after the publication of the original Cosmicomics, Calvino's 34 connected tales%E2%80%94spanning three separate collections%E2%80%94are finally together for the first time in English. The majority of the stories begin with a scientific assertion (reasonable or far-fetched) and feature the omnipresent narrator Qfwfq, cosmological guide and witness to the origins and formation of the universe. The first section (Calvino's initial collection of 12 stories) sticks closely to this script. The infinitely dense, infinitely hot moment just before the Big Bang is the subject of "All at One Point." In "A Sign in Space," Calvino imagines "the first ever sign," the very origin of language, as a marker Qfwfq invents to calculate his revolutions around the galaxy. Although the stories all feature such grandiose conceits, most also take up Qfwfq's human (if that adjective applies) passions and desires. The most well-known of the stories, "The Aquatic Uncle," concerns a stubborn sea creature who refuses to make the evolutionary transition to land. And in "The Spiral," a mollusk, having no visual perception of the outside world, constructs a beautiful shell for his potential mates and, in that process, comes to grips with the concept of time.

Where the section of early stories feels very immediate%E2%80%94a young Calvino experimenting with style and narrative%E2%80%94stories from his later collections feel more derivative, as they build on the early stories and pay homage to Calvino's vast array of influences. "The Origin of Birds" and "The Mushroom Moon," for instance, incorporate the structure of cartoons. And Calvino's interest in mixing logic into his writing%E2%80%94he was a member of the OULIPO collective of writers and mathematicians%E2%80%94comes through in stories like "t zero," a rewriting of Zeno's paradoxes, and "The Chase," which uses deductive reasoning to build tension around a car chase on traffic-jammed streets. In "The Count of Monte Cristo," Abbe Faria and Edmond Dante consider the best strategy for escaping Chateau d'If, weighing the merits of theory versus practice as they try to understand the labyrinthine prison.

While the stories often read like word problems, Calvino helps the medicine go down with playful intros and lighthearted tangents away from his weighty scientific reasoning. Where these stories are intentionally formulaic, the characters are all very human. In total, seven stories are translated here for the first time in English. Of these, two that were written specifically for a 1984 edition display the evolution of Calvino's literary interests. Using the same basic structure as the earlier Cosmicomics, these stories approach their scientific assertions with a more overtly philosophical bent. In "Nothing and Not Much," Calvino takes up the moment just before the Big Bang for the second time in the collection. Instead of simply playing with the assumptions of the theory as before, in this version he considers the totalizing consequences of believing in a universe spawned from nothing. While history has been unkind to some of the book's more outlandish conceits, stories like "Nothing and Not Much" show the prescience of Calvino's undertaking. As the known world becomes increasingly complex, storytelling must take the same path%E2%80%94to the very edges of the universe. (Sept.)