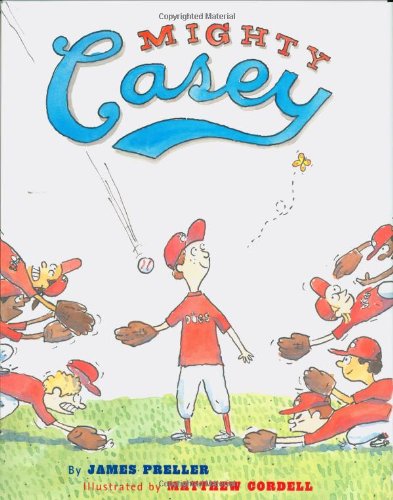 Reworking Ernest Thayer’s poem “Casey at the Bat” for Little Leaguers, Preller ( ) and Cordell ( ) knock out a spirited celebration of a team with the right attitude, if not skills. The Delmar Dogs have not had a good season: “Yes, it’s true, the Dogs had guts,/ and the Dogs had heart;/ but catching the baseball, well/ that was the hardest part.” Even on a team of misfits “one player stood out”: Casey Jenkins (“the worst by far, no doubt”). But it’s Casey who proclaims, during a game that seems as doomed as the rest, “The game is not yet done!” spurring his team on to their first victory. Preller’s couplets are full of clever wordplay and humor (“When Jinn Lee clubbed a homer,/ the fans stood and cheered./ The Dogs scored at last./ Said Lee, 'That’s, like, sooo weird’ ”). Set against ample white space, Cordell’s endearingly geeky kids take center stage (mid-game distractions include tree-climbing, a bee sting and a bathroom break on the left field fence). It’s hard to envision a reader who won’t take to these underdogs. Ages 4–8.