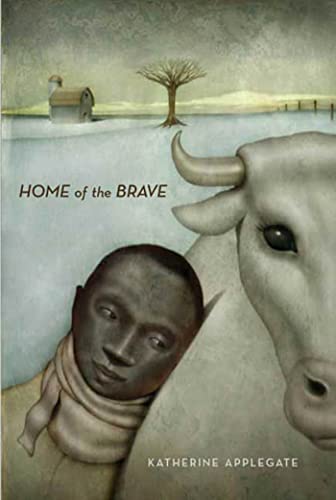 Home of the Brave

In her first stand-alone book, Applegate (the Animorphs series) effectively uses free verse to capture a Sudanese refugee's impressions of America and his slow adjustment. After witnessing the murders of his father and brother, then getting separated from his mother in an African camp, Kek alone believes that his mother has somehow survived. The boy has traveled by “flying boat” to Minnesota in winter to live with relatives who fled earlier. An onslaught of new sensations greets Kek (“This cold is like claws on my skin,” he laments), and ordinary sights unexpectedly fill him with longing (a lone cow in a field reminds him of his father's herd; when he looks in his aunt's face, “I see my mother's eyes/ looking back at me”). Prefaced by an African proverb, each section of the book marks a stage in the narrator's assimilation, eloquently conveying how his initial confusion fades as survival skills improve and friendships take root. Kek endures a mixture of failures (he uses the clothes washer to clean dishes) and victories (he lands his first paying job), but one thing remains constant: his ardent desire to learn his mother's fate. Precise, highly accessible language evokes a wide range of emotions and simultaneously tells an initiation story. A memorable inside view of an outsider. Ages 10-14.