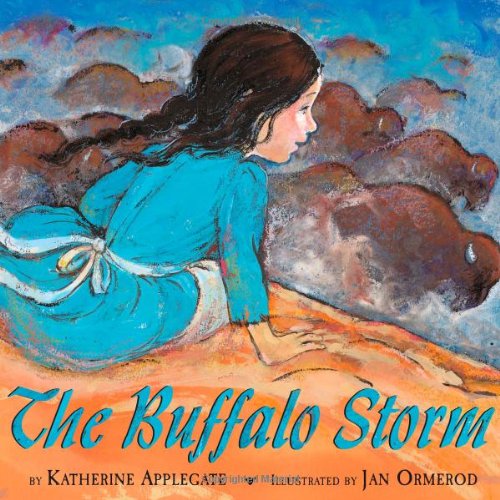 Applegate (Animorphs series; reviewed Aug. 13) journeys into the picture book arena with this richly descriptive verse narrative about a girl on the Oregon Trail. Afraid only of thunderstorms, Hallie embraces the trip’s challenges with pluck, inspired by a close bond with a grandmother who stays behind (“I am old and this is home,/ but I’ll be with you just the same”). In language loaded with metaphor and simile (a creek is “swollen with rain and looking for trouble”; a herd of buffalo stampedes “like a black ocean surging”), Hallie relates suspenseful events and her vacillations between fear and bravery. Colloquialisms enhance the naturalness of the protagonist’s voice, for example, “I’m not afraid, I told a skittering lizard./ I couldn’t say the truth of it,/ not with the clouds so low and fierce.” A quilt her grandmother wrapped her in during thunderstorms and bestows as a going-away gift makes several appearances (as do other unifying elements, like storms and buffalo), tying up the story a little too conveniently. Ormerod’s ( ) textured watercolors and pastels employ billowy swaths of color to suggest the vastness of the setting. Often, Hallie or the wagon train appears as just a small spot against a dramatic natural backdrop. Vivid imagery makes this lyrical tale an accessible, fresh addition to the children’s pioneer genre as it tackles themes of change, courage and home. Ages 4-8.