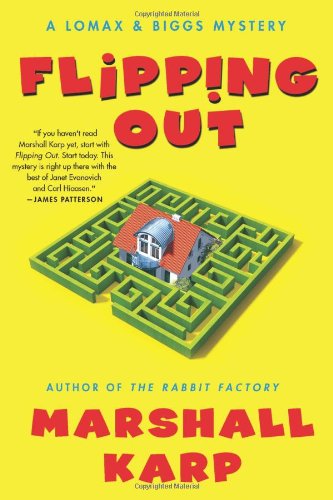 Flipping Out: A Lomax and Biggs Mystery

LAPD homicide detectives Michael Lomax and Terry Biggs take on a killer targeting a group of police officers' wives in Karp's irreverent third mystery (after 2007's ). When spouses of some of Lomax and Biggs's closest co-workers are found murdered, they begin their investigation by questioning the surviving members of the LA Flippers, the partnership of cop wives who, along with popular mystery writer Nora Bannister, have found a lucrative way to flip houses in the highly competitive Southern California real estate market. With the body count rising and pressure from Lomax and Biggs's superiors to close the case fast, the wisecracking duo must somehow track down a cunning psychopath before Biggs's wife becomes the killer's next target. Blending the gritty realism of a Joseph Wambaugh police procedural with the sardonic humor of Janet Evanovich, Karp delivers a treat that's not only laugh-out-loud funny but also remarkably suspenseful.