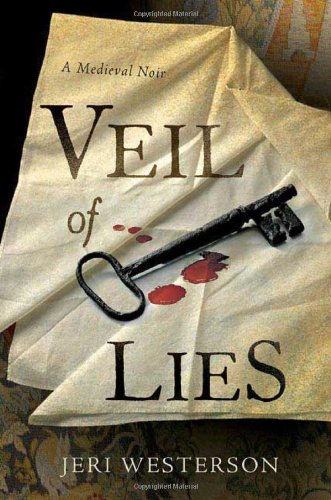 Veil of Lies: A Medieval Noir

Crispin Guest, a former knight who was stripped of his rank after being implicated in a plot against Richard II, now makes his living as a “tracker,” the medieval equivalent of a PI, in Westerson's promising debut, set in 1384 London. Nicholas Walcote, a wealthy cloth merchant, hires Guest to investigate his younger and attractive wife, Philippa, whom he suspects of infidelity. Guest's cursory probe is derailed after his client is found stabbed to death in a locked room. Philippa retains Guest's services to find her husband's killer, who may have been motivated by Walcote's possessing a legendary relic reputed to force those in its proximity to tell the truth. While featuring a hard-boiled medieval sleuth instead of a monk or a nun may not be quite as groundbreaking as the author suggests in her afterword (e.g., Susanna Gregory's 14th-century Cambridge physician Matthew Bartholomew), this is nonetheless an entertaining read that makes the prospect of sequels welcome.