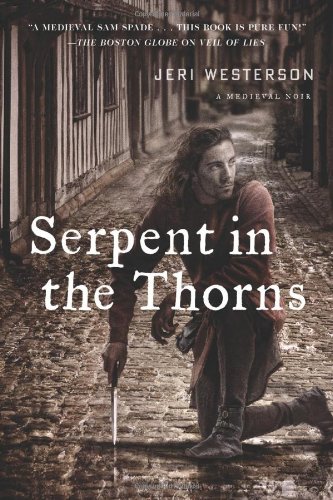 Serpent in the Thorns: A Medieval Noir

Westerson's second medieval mystery to feature former English knight Crispin Guest (after 2008's ) works better as a suspense novel than as a whodunit. Implicated in a plot against Richard II, the disgraced Guest (aka “the Tracker”) has reinvented himself as an investigator for hire, with both private and public clients. One day in 1384, Grayce, a simpleminded scullion, seeks Guest's help because there's a dead man in her room at the King's Head Inn in Southwark. Grayce claims she killed the man, who turns out to have been a French courier bearing a gift for the English king—the legendary Crown of Thorns, rumored to have been worn by Jesus and to have the ability to confer special powers on its wearer. The Tracker soon finds himself in a political tempest. Westerson's mix of period terms and American tough-guy prose—at one point an archer asks the detective, “Didn't you use to be somebody?”—may grate on the ears of some historical fans.