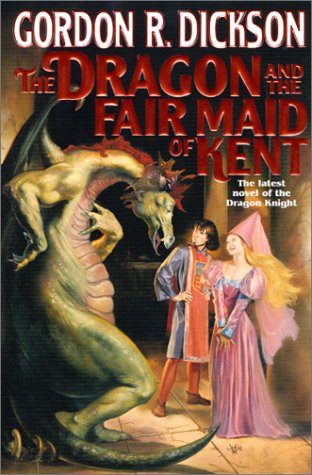 Dragon and the Fair Maid of Kent

In this ninth entry in the Dragon Knight series, Jim EckertDformerly a 20th-century mathematicianDhas adapted fairly well to the alternate-world 14th century, where he is not only a knight but an upper-level apprentice in Magick. Having learned to control his ability to change into a dragon, he has also come to practical terms with the world in which he and his wife, Angie, now reside. After toying with Arthurian legend in the previous volume (The Dragon in Lyonesse), the saga now returns to its semihistorical setting, Jim's castle, Malencontri, and its English environs. Sir Jim deals with the domestic (servants, unexpected guests, the marriage of friends Geronde and Brian), the political (machinations surrounding Edward III and his son and heir, Edward, the Black Prince), the medical (the bubonic plague), the martial (war against shape-changing goblins who carry plague-tipped spears) and, as always, dark powers and the ""magickal."" One of the charms of the series is the author's logical approach to magic. Not only does it follow strict metaphysical laws, there's even a sort of credit limit on how much one can use. The series has always explored the meaning of friendship, love, faith and loyalty rather than focusing on heroics and the high fantastic. This time out, there's about as much napping, tea-sipping and recovering from strenuous magical work and disease as there is swash and buckle. But the readerDwhether new to the series or familiar with itDwill not tire. Comfortably genuine characters, wit, the insightful juxtaposition of modern protagonists, ""real"" medieval life and the fantastic make for a highly enjoyable read. (Dec. 18)
close
Details