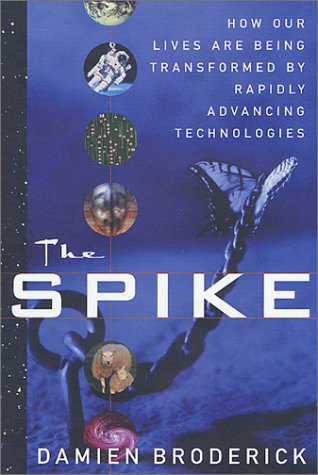 THE SPIKE: How Our Lives Are Being Transformed by Rapidly Advancing Technologies

Is technological change advancing so rapidly that we can no longer chart its progress? Are we careening ever closer to the point that scientists have dubbed "the singularity," the moment when the pace of innovation will lead to changes so profound that attempting to envision the future becomes an impossible dream? According to Broderick (; ), the answer is a resounding and enthusiastic yes. As he points out, the rate of scientific change has increased ("spiked") with exponential rapidity over the past 500 years; everyday machines—such as personal computers—already have microprocessing capacities that far surpass anything originally predicted when they were first invented. Virtual reality applications are routinely used in the operating room, while cloning has entered our world with astonishing speed. So why not, in the extremely near future, "smart paint" that changes color on command and converts light to electricity when no one is in the room? Some of the changes anticipated by Broderick include science-fiction staples such as uploading and copying one's consciousness; freezing terminally ill bodies for revival in the more medically sophisticated future; and so-called "Santa Claus machines," which can build almost anything—"washing machines or teacups or automobiles or starships"—out of highly abundant, naturally occurring materials. Broderick's freewheeling analysis of the "spike"—a phenomenon already dubiously questioned, he admits, in otherwise sympathetic scientific circles—may help bring this debate to a more mainstream audience, although his writing, despite its conversational tone, may still have too specialized a scientific and technological vocabulary for the average general reader.