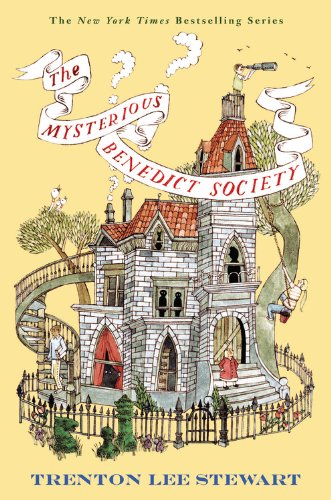 Stewart's ( , for adults) first book for young people begins with a bang. Gifted 11-year-old orphan Reynie Muldoon is sharing the newspaper with his tutor when she excitedly points out an ad: "Are you a gifted child looking for special opportunities?" She encourages him to take the series of tests cited in the ad, and the entire process resembles the otherworldly experience of Roald Dahl's , with puzzles within puzzles and tests within tests—some mental, some ethical, some physical. Ultimately three children pass the first test and go on to the next: Reynie, Sticky (born George) Washington and Kate Wetherall—all of them essentially orphans. A fourth, the "very, very small" Constance Contraire, joins them later, and Mr. Benedict describes why he has brought them together. Initially, readers—like the four children—may be unsure of what to think about this mysterious gent: Is he hero or villain? Mr. Benedict has recruited them to foil an evil plan, devised by a mysterious "Sender," to brainwash the population via secret messages—delivered by children—embedded in television and radio programs. The plot-driven novel follows many adventures among the four, whose unique talents all come into play; readers will likely warm to each of them. A couple of concluding twists involving Kate and Connie may throw readers a bit, but these do not detract from the book's entertainment value or from the author's sound overall structure. Though the book is lengthy, readers will likely enjoy getting lost in this fully imagined realm. Ages 8-12.