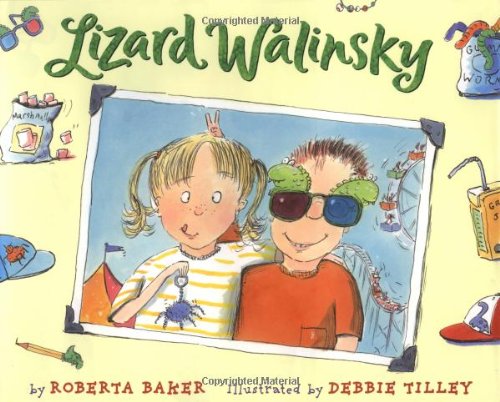 Like the protagonist of Baker and Tilley's , the insouciant Lizard (aka Elizabeth Ann) is exuberantly and decisively independent. "I'm a dinosaur girl!" she roars when her grandmother sends her yet another doll for her birthday. But Lizard is lonely, and she doesn't find a kindred spirit until she meets Spider at summer T-ball practice and admires his reddish brown spider, Nectarine. Although the plot initially moves slowly, Baker's details enliven the text as Lizard and Spider toast marshmallows with gummy worms and vow to "stay friends until the second Ice Age." Tilley packs her watercolors with sly humor and plenty of action. Lizard and Spider stretch on the ground imitating pythons and rattlesnakes, the kitchen wallpaper is decorated with bacon and eggs, and Spider's bed sports a blue spider canopy. Lizard is bereft when she discovers that Spider goes to a different school in first grade, but her second time finding a friend with similar interests proves easier and by book's end the dynamic duo is a threesome. This amiable story provides readers with an effective model about friendships. A bonus for Olive fans: the book jacket urges readers to find five cameo appearances by Olive, who does not appear in the text. Ages 3-6.