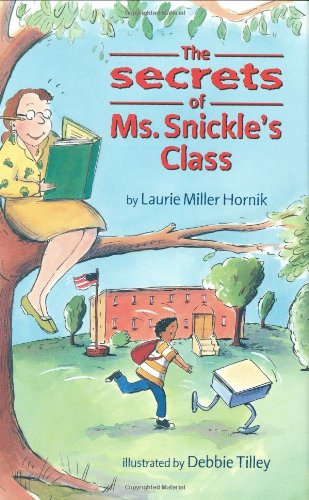 THE SECRETS OF MS. SNICKLE'S CLASS

Hornik's rather meandering debut children's book introduces an unorthodox teacher who has only one classroom rule: "No telling secrets." Ms. Snickle acknowledges the importance of secrets and keeping them, and announces that "Secrets are precious and sometimes a bit fragile, so be careful!" Her own secret is that after school is dismissed each day, she pushes a button that transforms the classroom into her home (one of the desks even morphs into her pet cat). Lacey, the class busybody, sets out to learn—and reveal—each of her classmates' secrets (which she does, a bit too easily). They range from the absurd to the ordinary: Eva, who lives in the park, used to be a swan; Dennis's mother is the tooth fairy; Oliver was so nervous the night before the first day of school that he wet his bed; and Hayley's secret is that she's allergic to secrets. Though Hornik interjects some amusing scenarios and wordplay into her narrative, much of the silliness seems strained (for instance, the teacher suggests a "Gross Brother and Sister Contest" to see whose sibling is the grossest), and the author never explains why Ms. Snickle and Eva exist in a world of magic, while the rest of the characters are normal. In a disappointingly facile ending, after her students lament the fact that their secrets are out in the open, Ms. Snickle reverses the revelations by conducting a lesson in "forgetting." Ages 7-10. (.)