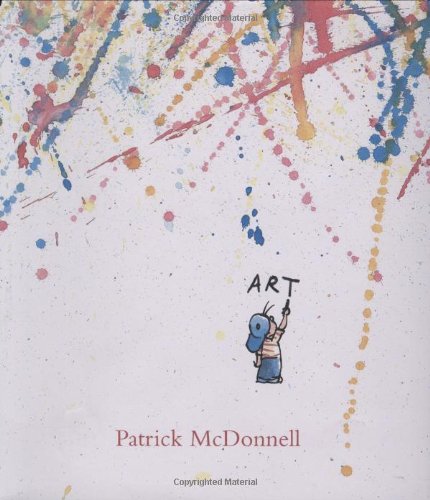 Art serves as a boy's name and favorite pastime in this cheerful sequence, which echoes Crockett Johnson's . McDonnell ( ) lures readers along with antic visuals and a catchy rhyming text about "Art and his art/ Can you tell them apart?" The boy stands about an inch-and-a-half tall in the squarish pages, and in one Jackson Pollock–esque spread, he is indeed covered in his medium. Wearing his blue baseball hat backward and attired in Dennis the Menace fashion, he reaches with a brush to fill the vast white space all around him with red, yellow and blue daubs and spatters, zigzags and spirals, drips and dots. Then he grabs a thick black pencil and doodles a flat house, a basic tree and a cartoon dog. All this activity wears him out, and when he wakes from a nap, he sees his creations tacked to the fridge: "Held there by magnets/ (stars and a heart)/ Put there by mother/ 'Cause mother loves Art." The hero, drawn neatly in a clean black line, with his compact body, shock of hair and giant smile, recalls everybody from Richard Outcault's Yellow Kid to Bill Watterson's Calvin. McDonnell takes a familiar topic—an imaginative boy who loves to draw—and injects this volume with an exuberant comic-strip sensibility. Ages 3-6.