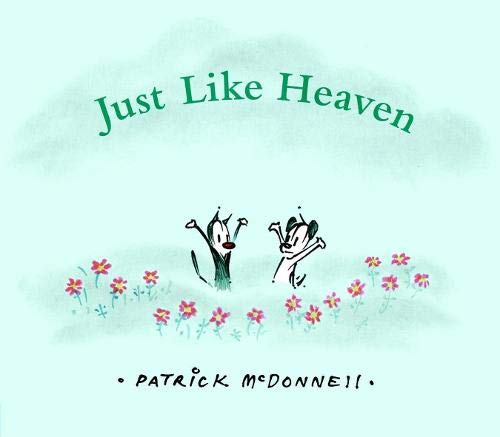 In a follow-up to , McDonnell brings back the stars of his comic strip for a meditation on the true nature of miracles. Mooch wakes from a nap and mistakes a thick fog for Paradise: " !" he decides. " ." He walks about, admiring all of its wonders. Then he meets a growling bulldog at the end of a short chain. "In the past, Mooch would have gone all fuzzy with fear and run away." But, the feline wonders, " ... Hug Time!" The bulldog's angry expression softens as he hugs Mooch back, and they wave animatedly to one another as Mooch departs. Eventually, falling asleep again, Mooch wakes up in the real world (the fog has lifted), which turns out to be " ." The palette, composed only of a fine black line and some bursts of blue-gray and touches of red (for Mooch's nose, the bulldog's collar) bursts into glorious full-color on the final spread. If one could cast the scales from one's eyes, Mooch demonstrates, the world really is heaven on earth. By limiting his palette, sticking to a clean layout (a line of text on top of each page, a picture beneath) and one story line with no digression, McDonnell delivers his message with maximum effectiveness. Ages 4-8.