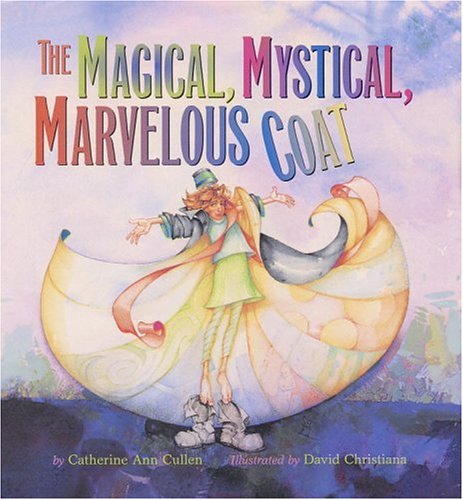 The titular coat of Cullen's whimsical debut possesses transformative powers, a theme tailor-made for Christiana's () fey style. "I went out on Monday to see what I'd see,/ And I saw a young giant who was hot as could be" outlines the structure for a week full of surprises as the heroine hands out coat buttons that each perform a specific deed. The rhymes are alliterative, if a bit contrived. For instance, the giant, cooled by the "cold" button, "began to emote,/ 'What a megacooliferous,/ marvelous coat!' " Similarly, the "warm" button aids a frozen swan ("What a meltificent, marvelous coat!" the bird exclaims), a third plays a tune that calms a stormy sea ("Ahoy to that maritime, marvelous coat!" yell the captain and crew of a ship). Christiana's dreamlike watercolors add a mystical element and create a context for the sometimes lurching text. He vests the main character with an arrestingly androgynous nature and fills the pages with signature touches—waiflike creatures with spindly legs and bare feet (or oversize shoes), odd corners where vaguely defined objects lurk and a sophisticated, shadowy palette. At times, the singsongy narrative works against the magical metamorphoses. In the end, the buttons unexpectedly reappear, and those whose lives were touched turn up to recount the coat's attributes in a final refrain; yet the conclusion's mix of fantasy and reality do not quite jibe. Ages 4-8.