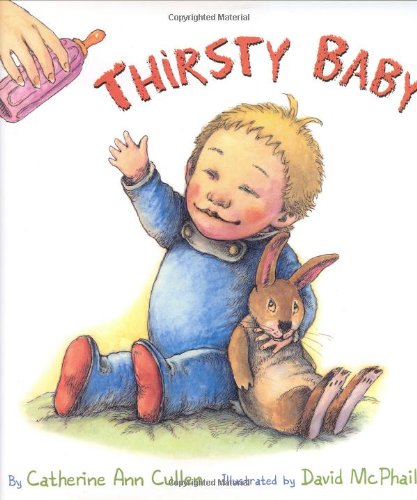 In this ode to the seemingly infinite demands of a child and the equally infinite love of the child's family, Cullen () employs both soothing repetition and elements of surprise. Baby's thirst remains unquenched after draining a bottle, the bath water, a pond and so on. But mother, father, sister and grandparents, who variously participate in the increasingly outrageous scenarios respond "Good boy!" each time. Dubliner Cullen's catchy verse occasionally hints at an Irish syntax: " 'I'm thirsty,' said the baby, 'and I need a drink.'/ 'Bath time!' shouted Mommy, and what do you think?/ He started with a sip, and he finished with a sup,/ And the blue bubbly bathtub, he drank it all up." McPhail's () watercolor-and-ink illustrations show baby traveling from crib to pond to urban riverside to seashore and back, always accompanied by a doting relative. While McPhail captures both the unsettling and the humorous results of baby's insatiable thirst (for example, a beached whale rests plaintively beside the wreck of a pirate ship and chest of gold on the sandy sea bottom), his characters' expressions and his warm palette radiate a sweetness that tends to tamp down the comic hyperbole of the text. As accomplished as the writing and the illustrations are, they don't especially enhance each other. Ages 3-6.