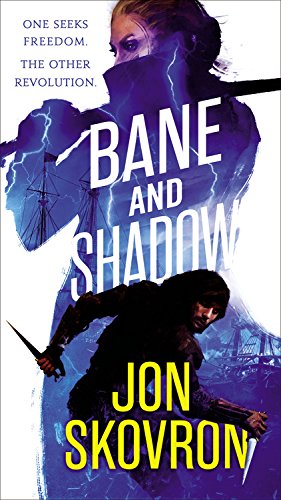 Lovers Hope and Red (introduced in 2016’s Hope and Red) return in the ingenious second installment of the Empire of Storms trilogy, set in a fantasy world where an empire spreads across many lands and seas. No easing into the reintroduction: the entire crew of an imperial frigate is slaughtered in the first chapter, their piratical killers identified by clothing alone. For readers who do not immediately recognize Bleak Hope, Brigga Lin, and the rest, a quick refresher with the first volume is probably a good idea. Skovron’s pedal really hits the floor around chapter four, as Hope and her MacGyver-ish crew battle to recover Red, who’s been taken by the biomancers. His durance appears light: Red has become Lord Pastinas of the imperial court, and is a favorite of the heir, Prince Leston. Red’s defiance of his loathsome masters is continually challenged by discoveries of the unsuspected holds they have embedded in his body and mind. Hope, gnawed by self-doubt, has the satisfaction of more straightforward enemies to skewer and allies to bind. The story is very much a middle volume, coming to a stop rather than a conclusion, but it’s a tremendously satisfying segment of the journey. Agent: Jill Grinberg, Jill Grinberg Literary Management. (Feb.)

This review has been corrected; a previous version listed an incorrect title.