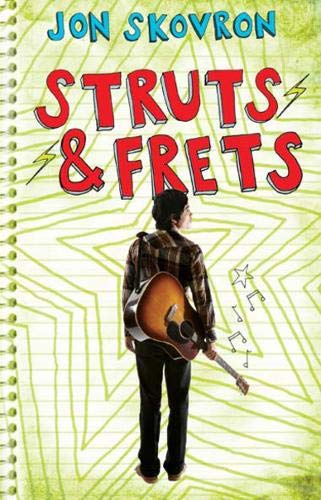 This first novel about a boy who loves music can be heavy-handed, but it hits enough high notes to be a crowd-pleaser. Sammy is trying to keep his band, Tragedy of Wisdom, together, but with a bullying singer and a spacey bassist, it seems destined to end in disaster. Of course, Sammy’s got his own problems, from his grandfather’s deteriorating health to a good friend who is hoping to escalate their relationship. After a bad open mike night, Sammy is convinced he “can’t sing in front of other people.” The characters are a bit extreme, such as Joe, the band’s rage-ridden frontman from the projects who writes a song about the “sanity closet.” Readers will easily predict the trajectory of Sammy’s story, but even so, this angsty protagonist is an easy character to like, and readers will relate to his struggle with the fact that “[t]hings happened that you couldn’t control.” The use of music throughout, as well as descriptions of what it’s like to play and perform, add flourish to this coming-of-age story. Ages 14–up.