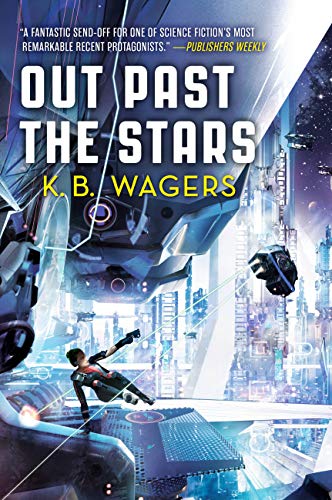 Out Past the Stars

Wagers sends their Farian War series out with a bang, delivering all the action, snark, emotion, and political maneuvering fans of Gunrunner Empress Hail Bristol expect. Hail has escaped the beings who captured her in Down Among the Dead, but now finds herself outside of her comfort zone yet again, embroiled in political plots she can’t shoot her way out of. The dangers are manifold: a confrontation is brewing between Hail and supersoldiers who claim to be gods, an ancient and powerful alien race is on its way to Indrana, and a millennia-long war between the Farians and the Shen rages on. Hail is out of her depth in trying to broker peace in the galaxy, but she has her beloved and cunning friends at her side—and still hasn’t lost an iota of courage from her days as a gunrunner. Fans will be sad to see the series end, but gratified by the action and intrigue of this fast-paced finale. This is a fantastic send-off for one of science fiction’s most remarkable recent protagonists. Agent: Andy Zack, the Zack Company. (Feb.)

Correction: An earlier version of this review used an incorrect pronoun to refer to the author.