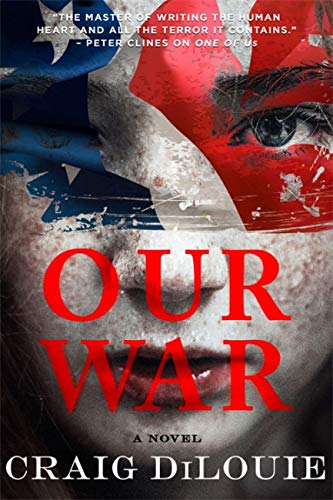 In a dystopian United States eerily reminiscent of the present, an impeached U.S. president refuses to leave office, starting a civil war. Dilouie (One of Us) focuses the story on orphaned children in Indianapolis who must participate in the war in order to survive it. After 10-year-old Hannah is orphaned, she joins the Free Women militia, looking for a family. The militia is forced to fight for survival, fearing that if the far-right “rebels” and “patriots” win, citizens will be stripped of fundamental rights. The more horrors Hannah witnesses as she assists from behind the lines, the more eager she is to join in on the battles herself. Unbeknownst to her, her 15-year-old brother, Alex, is still alive, but fighting for the rebels. He’s not sure he wants them to win, but he knows that if he doesn’t fight, they’ll likely kill him. Other factions complicate tactical and ethical decisions. Meanwhile, a local reporter and a UNICEF representative work together to try to save children from a war they don’t belong in. Dilouie makes his politics plain and occasionally resorts to stereotypes of the political right and left, appealing to readers who agree with him at the cost of alienating those who don’t. This gritty, horrifying tale of hate, fear, and hopelessness, sprinkled with moments of love, will leave readers with haunting memories. (Aug.)
close
Details