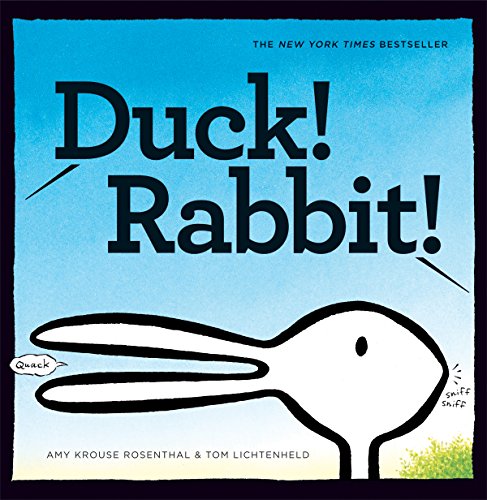 The team behind again plays with perspective and visual trickery, this time using a classic image that looks like either a rabbit (with long ears) or a duck (with a long bill). In a series of spreads that show the boldly outlined duck/rabbit against a blue sky, two offstage speakers, their words appearing on either side of the animal’s head, argue their points of view. The snappy dialogue makes for fine read-aloud: “Are you kidding me? It’s totally a duck.” “It’s for sure a rabbit.” Though the main image is basically static, Lichtenheld has fun with the details and setting, placing the animal behind green leaves (“Now the duck is wading through the swamp.” “No, the rabbit is hiding in the grass”), near water (“Look, the duck is so hot, he’s getting a drink.” “No, the rabbit is so hot, he’s cooling off his ears”), etc. The creature’s disappearance brings a brief moment of reconciliation, but the twist ending puts the speakers at odds again. Duck? Rabbit? As kids will readily see, it depends on how you look at it. Ages 3–up.