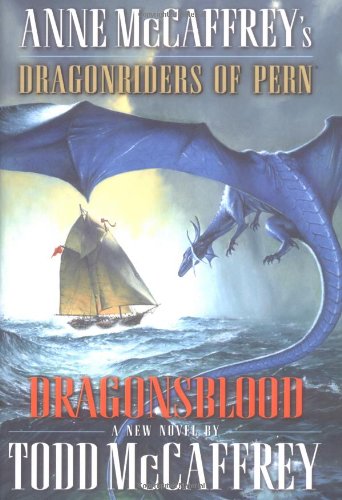 The torch has been passed and burns more brightly than ever in this latest chapter of the venerable Pern saga, the first of what one hopes will be many solo efforts by the son of series creator Anne McCaffrey ( ). The narrative shifts smoothly between Wind Blossom, one of the original colonists of Pern, who's struggling to create a legacy for future generations before she dies, and Lorana, a young dragonrider born 450 years later with unusual talents for healing and telepathy. A genuinely spellbinding set of time travel puzzles and paradoxes is set against the moving backdrop of two populations struggling to survive: the children of the colonists, learning to live in a new world as they lose the technology of the old one, and the dragons of Lorana's time, who are dying of a mysterious plague just when they're needed to protect Pern. The strength of the two women and the mysterious connection between them is gradually revealed through a number of surprising and sometimes heartbreaking parallel occurrences. This stand-alone tale fits beautifully into the existing history and style of earlier books while still breaking new ground. Despite being geared toward the existing fan base, it will be quite accessible to new readers. In her introduction, the elder McCaffrey writes, "son, you done did good and me proud!" Even the most nepotism-wary will concur and eagerly look forward to the next installment.